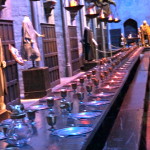 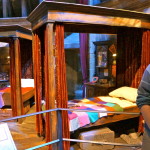 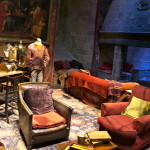 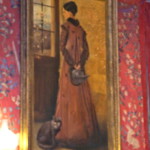 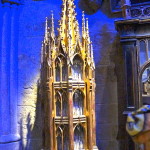 The Curio Cabinet with all of Dumbledor’s Memories 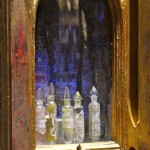 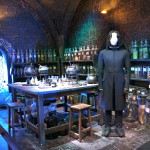 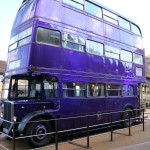 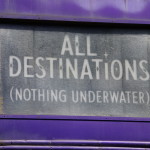 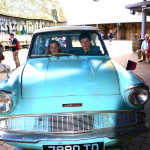 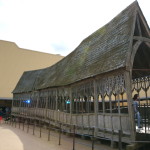 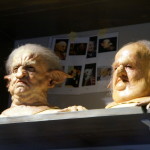 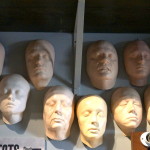 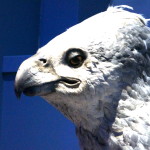 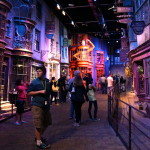 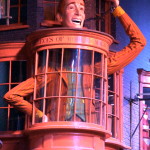 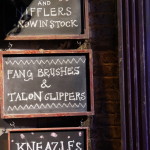 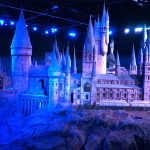 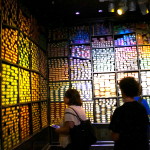 A Wand Box Labeled for Every Person Who Ever Worked on the Films. 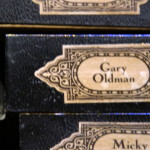 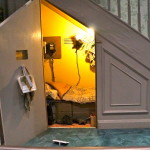 The Cupboard Under The Stairs

If you know me at all, you know that there was a period of my life that I was besotted with J.K. Rowling’s works.  I read my son each of the Harry Potter books every night, slowly, half chapter by half chapter for years.  It was delicious to read the series this way, slowly and aloud, explaining vocabulary to a precocious five year old, explaining why some events were taking place, what it might mean, what might happen next.  Delicious too was discussing the sounds of the character’s names, and the charms and spells, knowing Rowling borrowed heavily from latin to create brand new words that have now entered the English vocabulary.

My daughter came to Harry Potter on her own a few years later.  And though it wasn’t the same for her because she started later and could read them on her own to begin with, in her own fashion she became the biggest HP fan of us all, ending up reading the entire series five times and the last two books seven times.  (She even began a Harry Potter trivia club when she was in elementary school where she would organize trivia contest for any and all players at lunchtime.)

When we came to London last time, it coincided with the release of Rowling’s final book, The Deathly Hollows.  Back then, (was it five years ago now? Six?)  I booked a private tour with a guide who took us in a black cab around London to areas where the first 5 films were shot and then to the outskirts of London to the three locations where the original Potions dungeon, Harry’s home on Privet Drive and many of the scenes from inside Hogwartz were filmed at Oxford University.

Unfortunately part of that didn’t go well.  On our way to Oxford, the London area was hit by a rainstorm so furious that all motor ways in and out of the city were clogged, and we inched along for four hours in the most exciting downpour any of us had ever seen.  The guide, who was also the driver, was terrified of the roundabouts as we approached each one, many of them pooled so deeply that the water came half way to the door handles.  We skidded and lurched forward, and sweat out the terror of it.  We reached Oxford in time for the doors to close at 6 pm.  Instead of seeing any portion of hallways or great halls or the Dark Arts classroom, we sat in a pub eating cheddar sandwiches and waited out the rest of the storm.

We came back into London late that night just in time to stand in line at Waterstone bookstore, one of the first people in the world to purchase The Deathly Hollows.  Afterwards it was back to the little red hotel around the corner from the British Museum and my daughter and former husband fell fast asleep while I read aloud to my son until 1 am. Though he could easily have read that final book on his own by this time, it was our tradition.  We had come this far in the series and we wanted to finish it in the same way as we had begun.

That last book felt like a roller coaster, we wanted to read faster and faster, the thrill of knowing it would be the end, a bitter sweet reward to find out the thrilling ending.   We were both clutching our side of the book as I read – I noticed both of our hands were paper white. We didn’t finish until two days later, now back at home in our usual place, on the couch in the family room, snuggled next to each other.

So though it sounds cheesy, especially if you are from the land of “the industry” as I am, (I wouldn’t be caught dead at Universal Studios for instance) this time we headed to Leavesden for a tour of the Warner Brother’s Studio tour of the Harry Potter film sets.

There was no way to be disappointed by this, I will say that first off.  My fandom (our fandom) is fairly massive and very forgiving.  I expected to like it, and probably to love it.  However, I can honestly say that if you have ever had just a mildly pleasant feeling reading the books or watching the films, the experience of walking through the very simply organized tour will probably spark more than just mild delight.

Even with my Hollywood jadedness, the incredible detail the set designers, costumers, project architects, property masters, etc. put into each and every scene in each and every film astonished me.  Much of what we see in the film could have been recreated with CGI, as most fantasy films rely on this now.  But with the HP films, almost every prop you see on film is real; every costume has multiple layers of very particular fabrics, every set piece a written history.  The Gryffindor dorm rooms have things like off set corkboards for the actors playing their characters to leave messages for the other characters.  A portrait of a beautiful young Maggie Smith, dressed in finery, adorns the Gryffindor commons room, as a young professor McGonnical of course.  In Dumbledore’s office, an incredible glass curio cabinet houses eight hundred vials, each with a handwritten label of one of Dumbledor’s memories (which, if you have read the book, you know he can take out a memory and put into his Pensieve to relive).

The detail is hard to fathom, hard to wrap one’s head around.  Each wand in Olivander’s wand shop for instance also has a label on it, detailing the type of wood and core of each one.  (“Elm, Phoenix Tear;” “Willow, Heron Tail Feather” for example) There are 1500 wand boxes on that set.  The mere feat of these kinds of endeavors belies the passion that the crew had for this series.  I think this is why the films hold up to the books.  Among Potter fans/ Rowling fans (take your pick of which you would like to be called) there was always the fear, with each film released, that the “feel” of the book would be lost.  That it would cheapen once it hit celluloid.  The magic of the film series is that it never lost the depth of the incredible sensory world that Rowling built up for the readers, layer by layer by layer.

The only thing missing from this experience was leaving for the studios from track 9 ¾ at Charring Cross station (which does exist by the way, you can go there and see half of Harry’s luggage cart sticking out of the wall).  Instead we boarded a charter tour bus and sat squished together on the lumbering, 90 minute bus ride.  Many of us fell asleep, including the man sitting just ahead diagonal to my seat.  He woke me up when he fell out of his chair in his slumber and straight onto my outstretched leg.  All 250 pounds of his dead sleeping weight.  I have quite a large black bruise that covers most of my knee on that leg, and though my leg pinched every time I stepped on it throughout the tour, it didn’t keep me from loving every second.