The Willows Inn on Lummi Island: A Celebration

As an honorary B’hamster, (what people in Bellingham, Washington call themselves) because I visit my boyfriend Masa there so often, I had heard tell of an incredible restaurant on the small island named Lummi, across the Bellingham Bay. A birthday was upon us, I won’t say whose, so Masa and I made our way there for a celebration. Driving North on the 5 freeway, 12 minutes from Bellingham, we took the Slater Road exit and made our way to the Whatcom Chief Ferry.  The ferry lands at Gooseberry Point and takes its passengers, many of us still seated in our cars, for a seven minute glide across smooth waters to the landing on Lummi. 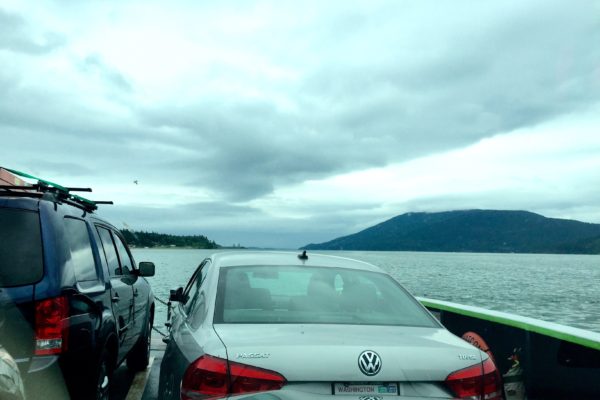 Lummi Island is small, with only about 900 occupants most of the year – though that number swells in the summertime with local US and Canadian residents (only 20 minutes from the Canadian border in Washington State) hitting the island in great numbers for fishing, hiking, wild berry picking and water recreation. There’s one school house, one post office, a couple of cafes and a burger joint called Sauce Burger – which everyone raves about but is only open Friday-Sunday in the off season. (Sadly, we were there on a Monday.)

And then there’s The Willows Inn. Located about halfway round the island, driving the bend you’ll start smelling the nostalgic aroma of campfire, which means you’re almost there. 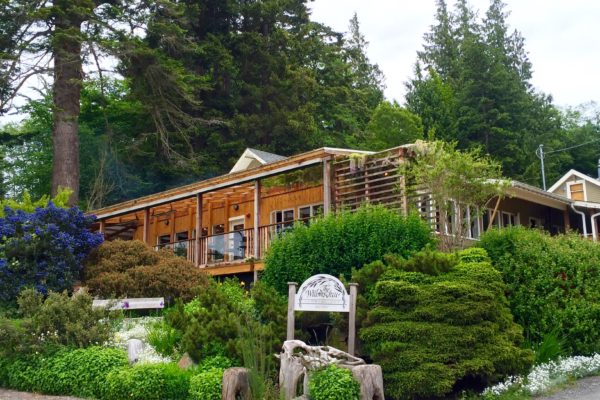 The Willows Inn is a small wooden building that looks out to the wide open Rosario Strait just across the road. Set above the gravel driveway, to the right of the restaurant and reception lobby is a small smoke house and the roaring fire we smelled about a half mile away, burning Birchwood or Alder. 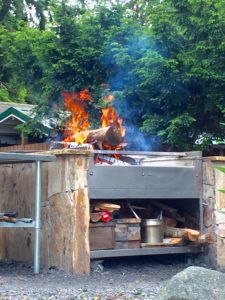 Masa and I checked into the hotel, then took a hike while waiting for our room to be ready. We were told there was a nice easy loop nearby so we headed there and noticed pruning shears on the cork board near the entrance with the map of the area, next to notices to keep the park clean and to stay out of the locked community flower garden. The shears were available to any hikers who wanted to cut fruit from bushes or trees or help keep the trail kempt. 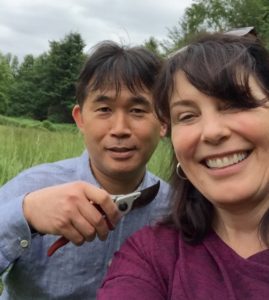 All fruit was finders keepers, so we headed out hoping for some late spring findings. No such luck, berries are summer fruit and aside from the lovely flower garden, there was nothing else to cut.  Even the pathway looked perfectly pruned on both sides — but we did work up an appetite on that short hike, something much needed for the dinner ahead.

Apart from the lovely setting and it’s long history (first opened in 1910) The Willows Inn is now famous for its 22 course meals prepared and designed by head chef Blaine Wetzel and his motley crew of foraging chefs. Blaine is arguably one of the most inventive chefs in America right now. His method is to use only local ingredients from Lummi and surrounding islands and encouraging every mili-ounce of flavor out of that ingredient. Sometimes that means not doing much to it at all, allowing the flavors of incredibly fresh produce and meats to speak for themselves with just a nudge of creativity. And sometimes it takes a great degree of inventiveness. Here’s a review from the editor of Saveur from June 2015.

“At the grill, a cook named Nick is rolling turnips directly in the embers. Once they’re nicely charred and cooked through, the roots will be peeled—leaving a few sticky burnt bits around the edges for character—then halved and marinated in lovage-infused whey. Then five hours in the dehydrator and, just before they’re served, the withered turnips are slaked with a grilled shiitake broth and garnished with toasted mustard seeds and tiny marjoram leaves.

I laugh—because of course it doesn’t sound simple at all. Later, though, encountering this dish at dinner, I see what he means. The taste is clear, dazzlingly direct, the essence of turnipness expertly coaxed forward by all this burning and slow-drying and careful reconstituting. Who knew a lowly turnip could possess this meaty depth of character, such goddamned swagger?” — Adam Sachs, Editor-in-Chief, Saveur

Masa and I sat down on the deck, along with the other 30 or so guests – we were encouraged to arrive no later than 6 pm.  Along with our cocktails, the beginning of the food parade began – at least five appetizers, maybe more – all while watching the sunset over the bay. 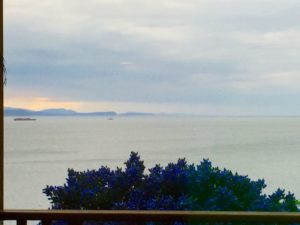 Masa and I delighted in the small dishes, each one with so many layers of flavor all perfectly suited to the main ingredient. A simple roasted kale, but with dots of truffle emulsion so heavenly we stopped talking instantly to take in full “moment” of it. And the next offering, smoked cod “doughnut”, a savory, plump ball of perfectly fried dough, with a bite of smoked cod buried within, was even better. Just one each, but just one was all that was needed, each bite so deeply flavorful. Roasted sunflower root, native oysters and cured rockfish followed. I was so taken aback at the bliss of it all, I forgot to take pictures of some of these.

We moved into the main dining room after cocktails and appetizers. The entrè dishes began. Revelation after revelation. At one point we had just tasted a bite of spring turnip shoots, roasted and sauced with squid ink broth. We just shook our heads and stared deeply into each other eyes, which could only mean there were no words for flavors as sublime as these. Another favorite was salmon berries, tossed with local rose petals and rose granita. There was even a course that was made up merely of huge slices of homemade bread (of course), local butter and pan drippings in which to dip. A guilty pleasure (often performed behind closed kitchen doors in homes everywhere) offered up as gourmet course. Brilliant!

What caught our attention almost as much as the incredible, indelible food, was the staff and the way Blaine Wetzel has managed to create a sense that everyone — chefs, guests, and servers — are in this together. Each dish is curated (and I don’t use that hipster word lightly, ever. But in this case, it’s apt.) by one of the chefs who is in charge of it from start to finish. This means sourcing each ingredient, even if it means foraging berries, or finding a local resource for the items. At cooking time, the ingredients have been prepared earlier in the day and one dish at a time is produced by the lead chef for that item with all other chefs helping. 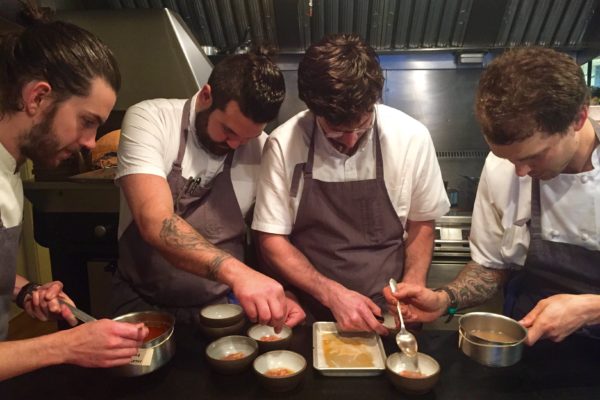 The kitchen is wide open to the dining room. It’s run so perfectly that at any given time there are no dishes, no clutter, just beautiful black slab counters with only the exact ingredients needed for the next dish – and all hands on deck making it. I know this, not just because I could see the operations clearly from our table, but because the guests are welcome to walk into the kitchen at any time and watch, chat, take pictures with any one of the chefs or workers. In fact, it’s encouraged. This is a one sitting, four-hour meal; it’s nice to hang out with the cooks for some of it. 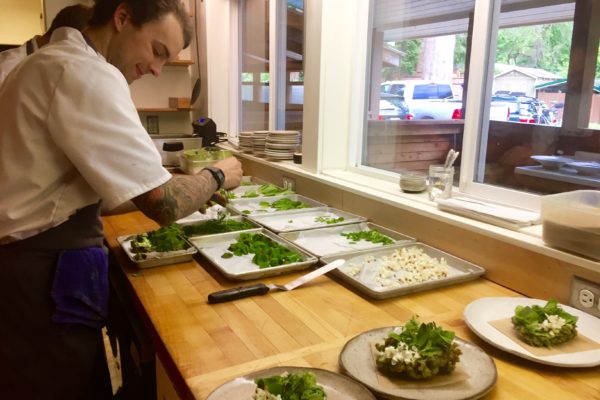 Head chef Wetzel himself came to our table, though we had no idea it was him, following a server who described the dish set in front of us. Wetzel walked behind the server, setting down hot towels on the table. He was laughing, though a better term is “giggling boyishly.”  I said, “Why are you laughing?” “Because I’m just surprised that the server didn’t really explain the dish to you very well.”  We had met just about every server so far, the protocol appeared to be constant rotation – and to us, this was another waiter. “Oh, would you like to explain it further?” I asked, joshing with him. He did, much more extensively, and I think I said something like, “Well done, thank you.”  He laughed again and went off into the kitchen. Later we learned that it was Blaine Wetzel. (And later, when we realized other people were walking straight into the kitchen, we had to go and explain ourselves and, of course,get a picture. He was so happy to participate, as if nobody had ever asked this before). 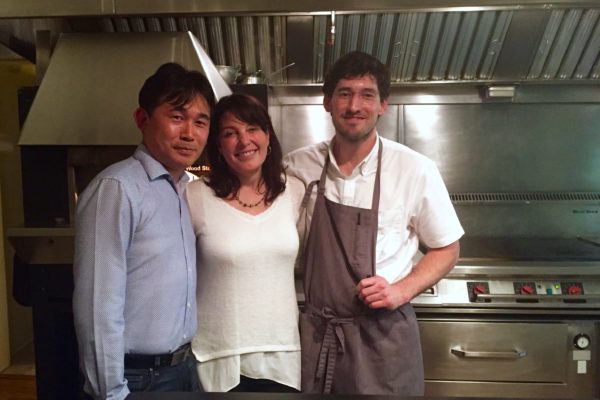 The pace is slow, the dishes are small, but they go on and on and on. One bite is so delectable, you don’t want the flavor to end, so one is happy to eat slowly, savoring. Masa and I both noticed that the waiters, chefs, even the dishwasher, seemed like just about the most content people on earth.

I walked through the kitchen twice, talking to everyone, snapping pictures. I’ve never seen anything like this quiet, pleasant operation of young men and women dedicated in each moment to the food they devotedly prepare, and to their guests’ enjoyment. It felt as if after dinner we would all sit down by the fire and chat about our lives. It’s that kind of “we’re all in this together” feeling I mentioned before.

I’ll be honest. It’s a dearly expensive culinary excursion; meals cost $175 per plate at the time of writing. We are already trying to justify another celebration such as this, for some reason, any reason, just so we can experience this locally sourced, passionately prepared, foraged feast again. Well, I think my sister is having a very big birthday soon… 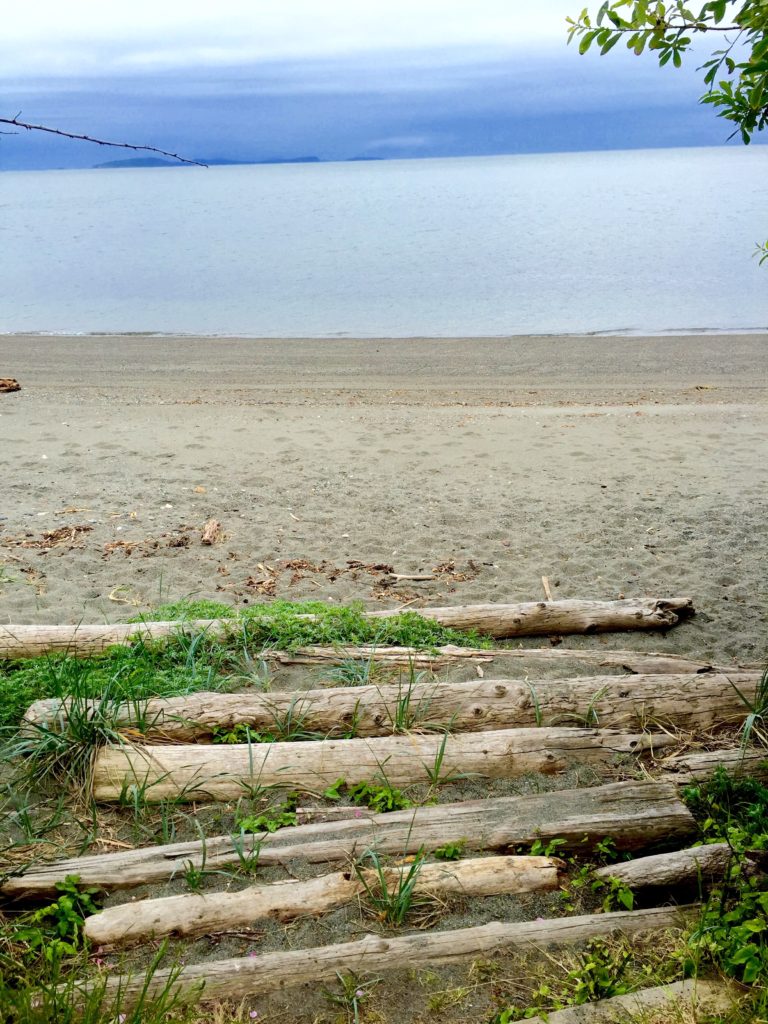